Sorption of Uranium on Rocks and Minerals

What does sorption mean?

Sorption is the attraction and adhesion of ions from an aqueous solution to a solid with which it is in contact. The sorbing phase is called "sorbens", the adhering one is called sorbate. Depending on the sorption mechanism the term sorption is further subdivided into adsorption, surface precipitation, and absorption. Hereby sorption is defined as the accumulation of aqueous species onto the solid-solution interface in form of a monolayer and not as formation of three dimensional molecular structures. Surface precipitation is the growth of a solid on a previously existing solid phase. Surface precipitates form a primitive, in three dimensions repeating molecular units .Absorption is the diffusion of aqueous chemical species into a solid phase, whereby the intrusion depth into the solid has to be greater than a few nanometer.

The sorption of heavy metals on a solid phase can be quantitatively described by the distribution coefficient (Kd-value), adsorption isotherms, and surface complexation models. The Kd-value is simply the result of an experimental measurement in a closed system, in which a known amount of geomaterial and a certain volume of a solution of known composition resides. Thus, the Kd-value is an unspecific variable, which is only correctly applicable at identical experimental conditions. Are the experimental conditions changed, e.g. the pH, the Kd-value is no longer applicable and has to be determined again.

The graphical representation of the equilibrium concentration of an ion C in contact with a solid phase as a function of sorbing mass of this ion, related to its dry weight of the adsorbens C* is called the adsorption isotherm. The two most well known isotherms used for the description of adsorption processes are the Langmuir-isotherm and the Freundlich-Isotherm. The application of such isotherms leads to useful information concerning the sorption process. For example it is possible to calculate surface site densities from maximum surface loadings. Also, it is possible to distinguish between different surface sites. However, the sorption mechanism is not specified.

More specific are surface complexation models. They aim to specify the sorption process of aqueous ions on a solid phase. The models are based on the assumption that sorption takes place via chemical reactions between the aqueous species and specific surface binding sites. Surface complexes will form which contain the ions and the surface site. Hereby, sorption is distinguished in chemical bonding of the aqueous ion with the surface site, i.e chemisorption and formation of inner sphere complexes, and physical adsorption, in which the aqueous ion sticks to the surface via electrostatic forces and forms outer sphere complexes.

What are rocks and minerals?

Minerals: Minerals are constituents of rocks and thus form substantial parts of the earth. Minerals are physically and chemically homogeneous natural solids of the earth, the moon and other orbs. They are, not considering a few exemptions, inorganic and crystalline.

Rocks: Rocks are multi grain mineral aggregates. In contrast to minerals, rocks are heterogeneous natural bodies. They are characterized by their mineralogical and chemical composition, their texture, and their geological unit.

Our research area are studies related to the sorption of uranium on the rock phyllite and the iron mineral ferrihydrite.

Our studies are related to the former uranium mining activities in Saxony and Thuringia/Germany. Tailings containing uranium bearing rocks are a source of migrating uranium into the nearby populated area. Furthermore, our studies are conducted in the framework of the safety disposal of high level radioactive waste. Safety assessment studies distinguish between a near-field, i.e. the high level waste completely encased, e.g. molten in glass or in metal containers, and the far-field, which is the adjacent geological material. Underground contaminants migrate predominantly with the groundwater through the rocks. We aim to contribute to an improved understanding regarding the sorption process of migrating uranium on the surrounding rocks. Our research leads to fundamental new sorption data, which eventually will lead to improved risk assessments and hence to a reduced risk for men and the environment.

At the beginning of our studies a detailed characterisation of rocks and minerals, onto which uranium and other actinides are sorbed, is conducted with the following techniques: 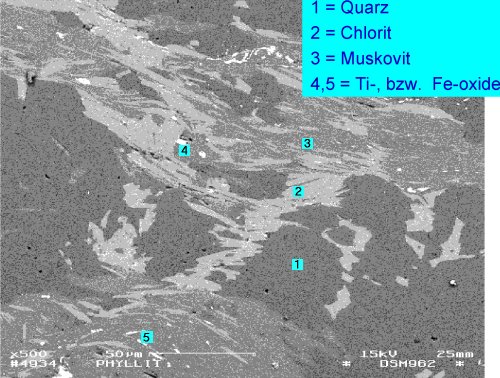 Batch sorption experiments were conducted with the rock phyllite and its mineralogical constituents, i.e. quartz, chlorite, muscovite, and albite. The experiments were conducted in the pH range of 3.5 to 9.5, using various ionic strengths and various uranium concentrations (1×10-5 M, 1×10-6 M, 1×10-7 M). A grain size of 63 to 200 µm and a solid concentration of 12.5 g/L were used. The separation of solid from aqueous phase was achieved by centrifugation and subsequent filtration using 5 nm membranes. The elemental concentration in the filtrates is determined by ICP-MS. 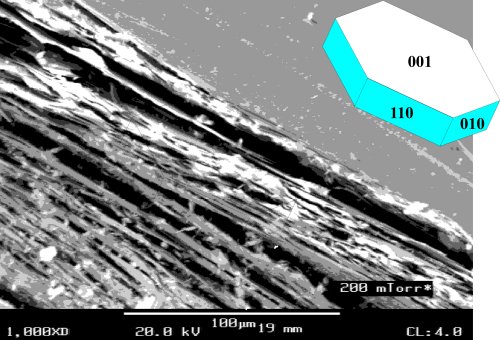 To apply Surface Complexation Modelling to sorption data the following parameters have to be determined first. The specific surface area is measured with the BET method. The surface site density and the required surface acidity constants were calculated from adsorption isotherms and potentiometric titration. Kinetic processes of mineral dissolution and formation of secondary phases are also considered in interpreting sorption data. We were able to detect, that one of the mineralogical constituent of the rock phyllite, i.e. the mineral chlorite, releases substantial amounts of iron while in contact with water which results in the precipitation of a secondary mineral phase ferrihydrite. Furthermore, SEM and AFM are used to determine the different reactivity of crystallographic faces in sorption studies.