What are humic acids ?

Humic acids are biopolymers that are formed beside other humic substances (fulvic acid, humin) during the degradation of biological material. Soon after their discovery by the German chemist Karl Franz Achard (1753-1821), humic acids were recognized as general and essential constituent of agriculturally utilizable soils. Up to now, they remained subject of scientific investigations, which are predominantly connected with scientific problems of soil science as part of the modern agricultural science. In addition, the medicine dealt and deals with humic acids, especially in the domain of balneology, where humic acids in moor and well water, peats and soils are accepted as therapeutic agent as well as in the domain of virology, which could verify virostatic properties of humic acids.

Although there is a lot of information about the properties of humic acids, the level of knowledge of humic acids concerning their physical-chemical characterization for the explanation of their chemical reactions with other substances is still unsatisfying. In the last years, humic acids became increasingly an object of environmental research. The reason is, that humic acids play an important role for the migration of heavy metals in the geosphere due to their ubiquitous occurrence and their chemical reactivity.

For the chemical reactivity of humic acids their functional groups are determining. These are predominantly oxygen containing groups, such as carboxyl and phenolic OH groups, that can be easily determined by IR spectroscopy. 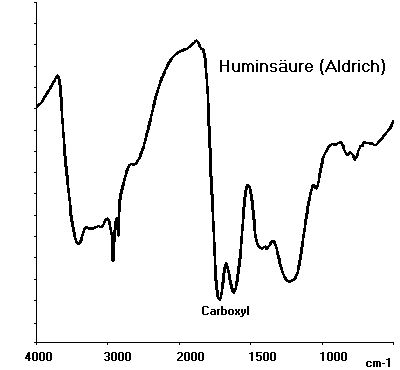 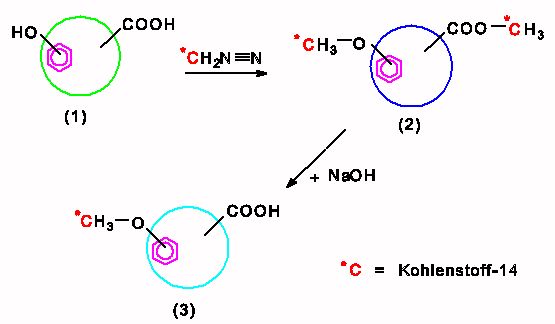 Humic acids are continuously subject to alterations in the biosphere. Already small changes of natural conditions, such as changes of the pH value or of the ionic strength, are able to induce modifications of structural properties, for instance, breaking of ester or hydrogen bonds. Thus, the macromolecule which is coiled in the acidic pH range unfolds at higher pH values resulting in a release of previously sterically hindered or bound functional groups or even resulting in a partial fractionation of the humic acid molecule. Therefore, humic acids isolated from natural systems are never identical with humic acids in their natural environment. Consequently, results obtained from investigations with humic acids in the laboratory cannot be transferred into geochemical model calculations regarding the migration behavior of radionuclides in the nature without further evaluation.

The current knowledge of the chemical structure of humic acids shows, that the reactive functional groups can be assigned formally to certain low molecular organic compounds. Therefore, for basic studies organic compounds such as salicylic acid can be used as humic acid model substances. We have used such humic acid model substances, for instance, for the investigation of the binding of uranium onto humic acids by X-ray absorption spectroscopy (EXAFS). However, such relatively simple model compounds are not able to describe comprehensively the properties of humic acids. Therefore, in agreement with the research objectives of the Institute of Radiochemistry, a team of the department of Organic Tracer Chemistry has developed polymeric model substances for humic acids. The goal of this study was to develop substances which show functional properties comparable to natural humic acids but are chemically more stable. In the group of melanoidines, which can be synthesized relatively easily, we found humic acid model substances. Their functional properties, molecular sizes and other parameters can be varied largely by selecting appropriate precursors and experimental conditions of the syntheses. According to our current knowledge, these synthetic humic acids are more comparable to natural humic acids than polymers of polyphenols which also show humic acid-like properties.

The melanoidine reaction, which was described the first time by the French chemist L.C. Maillard (1916), is based on the reaction of reducing sugars with amino acids. It is also suitable for the preparation of 13C- and 14C-labeled model humic acids. We synthesized 14C-labeled humic acids with specific radioactivities, that allow kinetic investigations at environmentally relevant concentrations. Such high specific radioactivities could never be accomplished by the labeling of natural humic acids. Furthermore, the functionality of those natural humic acids would be changed largely and the stability of the labeling is assumed to be lower.

The melanoidine reaction, which is also named "Maillard-Reaction" after its discoverer, is also assumed as one possibility for the formation of humic acids in nature and is therefore not only interesting for basic studies. The knowledge of the interaction between those substances and heavy metals, such as radium, uranium and its decay products that are released into the environment due to former uranium mining in Saxony and Thuringia, is important. Therefore, we investigate and compare the complexation behavior of natural and synthetic humic acids. The natural humic acids were isolated from humic substance-rich surface water of the mountain bog "Kleiner Kranichsee" which is located in the vicinity of the former uranium mining area Johanngeorgenstadt (Saxony, Germany). 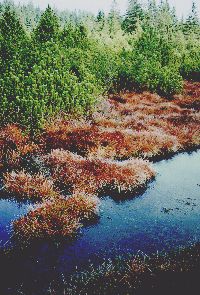 The sampling and investigations in this sensitive nature reserve were carried out with the approval and support of the competent Environmental Authority in Schwarzenberg/Aue. More than 400 liters bog water were sampled and then processed in the laboratory. 10 grams humic acid and 14 grams fulvic acid were isolated. We found that the humic acid of the bog "Kleiner Kranichsee" is characterized by a high chemical reactivity, especially by a pronounced reduction ability. That means, that in the intact natural bog system dissolved metals should occur predominantly in their lower oxidation states. With regard to interactions between humic acids and uranium which is potentially dissolved from abandoned uranium mining facilities it is possible to draw conclusions for the migration of uranium in the environment: It is to expect that in this ecosystem dissolved, hexavalent uranium is reduced to insoluble, tetravalent uranium and thus, uranium is immobilized.

Our studies of the mountain bog "Kleiner Kranichsee" as well as other investigations show that only the comparison of results obtained from theoretically based investigations in the laboratory with results obtained from studies of natural systems allow to draw fundamental conclusions relating to practice. This is especially important for the remediation of the former uranium mining facilities in Saxony and Thuringia which is essential for an effective reconditioning of the ecological balance. For this the Institute of Radiochemistry gives valuable contributions with its applied humic acid research.