The mixing of slugs of water of different quality is very important for pre-stressed thermal shock situations. When the emergency core cooling system is activated during a loss-of-coolant accident, cold water is injected into the hot water in the cold leg and downcomer. Due to the large temperature differences, thermal shocks are induced at the reactor pressure vessel wall. Temperature distributions near the wall and temperature gradients in time are important to be known for the assessment of thermal stresses. This temperature distribution is highly influenced by the mixing of the injected emergency core cooling water with the ambient water of higher temperature on the way through the primary circuit. The investigations of the processes of turbulent mixing under the influence of buoyancy forces caused by the temperature differences can contribute to the assessment of the thermal loading of the vessel wall.

Due to the fact, that the test facility cannot be heated up, the necessary density differences were simulated by adding sugar (glucose) to the water that is injected into the cold leg. To observe the mixing of the emergency core cooling water, this water was tracered by small amounts of sodium chloride, as in previous experiments. Generating density differences by high salt concentrations is not possible, because the measurement system is very sensitive and would be saturated at high salt concentrations.

The experiments without density effects serve as reference experiments for the comparison. The left part of Fig. 1 visualises in an unwrapped view the time evolution of the tracer concentration measured at the two downcomer sensors. The downwards directed red arrow indicates the position of the loop with the running pump, in that case delivering 10 % of the nominal flow rate. At the upper downcomer sensor, the emergency core cooling water (injected in each experiment from t = 5 to t = 15 s) appears directly below the inlet nozzle. Due to the momentum created by the pump, the flow entering the downcomer is divided into two streams flowing right and left in a downwards directed helix around the core barrel. At the opposite side of the downcomer, the two streaks of the flow fuse together and move down through the measuring plane of the lower downcomer sensor into the lower plenum. Almost the whole quantity of emergency core cooling water passes the measuring plane of the lower downcomer sensor at the side opposite to the azimuthal position of the affected loop. The velocity field responsible for the observed tracer distribution is typical for single-loop operation. It has its maximum at the opposite side of the downcomer and a minimum at the azimuthal position of the running loop, which has been found in velocity measurements by means of a laser-Doppler anemometer(LINK) at the ROCOM test facility, too.

The maximum tracer concentration of the emergency core cooling water in the downcomer is 20.1 % of the injected water concentration at the upper sensor and 8.4 % at the lower sensor. 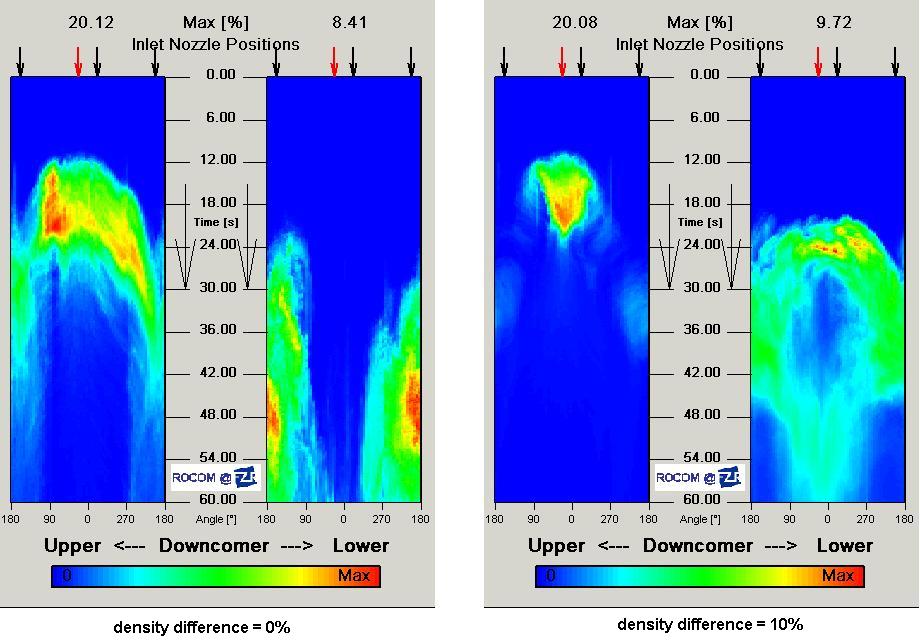 Fig. 1: Time record of the perturbation at the sensors in the downcomer (unwrapped view, the red arrow indicates the azimuthal position of the loop with emergency core cooling water injection) in the experiments with variation of density difference of the injected water

Experiment with a density difference of 10 %

Experiment with a density difference of 4 %

Fig. 2 shows an experiment with a density difference of 4 %, while the flow rate was again 10 % of the nominal. At the upper sensor, the width of the azimuthal sector covered by the emergency core cooling water is in-between the two cases with 0 % respectively 10 % density difference. Near the lower sensor, the emergency core cooling water reaches the opposite side of the downcomer and the region below the inlet nozzle position almost at the same time. That means, that one part of the emergency core cooling water follows the stream lines of the external momentum driven flow field and another part directly falls down due to the internal momentum created by density differences. We consider this as an intermediate state between momentum and density driven flow. The experiment shown in Fig. 2 was therefore assigned to the transition region between the two flow regimes.

Based on the described observations, the set of conducted experiments, was divided into three groups: (1) buoyancy dominated flow, (2) momentum dominated flow and the (3) transition region. The conditions at the inlet into the downcomer were used to calculate Froude-numbers of the experiments according to the following formula:

Lines of constant Froude-numbers calculated by means of this formula are shown in Fig. 3. All experiments, identified as density dominated are located in the region left of the isoline Fr = 0.85 and all momentum dominated points are found right of the isoline Fr = 1.5. These two numbers are critical Froude numbers separating the two flow regimes for the ROCOM test facility. Therefore, the critical Froude number for transition between momentum controlled and buoyancy driven mixing is about 1.0.