For the investigation of multiphase and multi-component flows, which are of interest for instance in the chemical engineering or in oil extraction and processing, there are only few suitable measuring techniques. For this reason we have developed a high-speed complex impedance needle probe. Such probes are able to distinguish the different phases or components of a flow by measuring the complex value of the electrical impedance at a high data rate (up to 10,000 samples/s). The complex impedance probes can be applied, amongst others, for the investigation of: 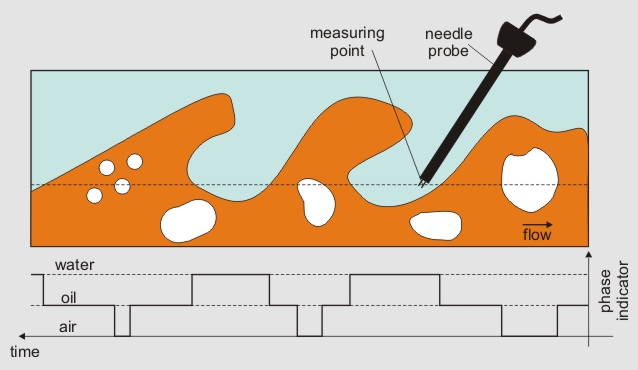 The measuring system consists of a needle probe in double coaxial geometry (see figure below) and proper electronic circuitry, responsible to generate and measure the signals involved in determining the complex impedance.

Furthermore, the complex impedance Z measured by the probe is inversely proportional to the complex relative permitivitty εr* of the fluid under test according to

The table below shows some measurements of the relative permittivity εr and conductivity σ carried out with the complex impedance needle probe for different liquids and air. The values in the table are the mean value of 20 measurements sampled at a frequency of 10 kHz. The excitation frequency was 200 kHz. The impedance needle probe was firstly calibrated on air and water, in order to measure the complex permittivity. Reference relative permittivity was taken from CRC Handbook of Chemistry and Physics. Reference conductivity was measured by a conductivity meter.

The needle probe system has been employed to measure air and water bubbles flowing in gasoline (εr = 2.02). The excitation frequency was again 200 kHz and sampling frequency was 10 kHz per channel. The needle probe was located inside an acrylic glass column. The flow of bubbles was synchronously recorded with a high-speed video camera to evaluate the needle probe data.

First, air bubbles were generated at the bottom of the column. The following video shows the results for this experiment. The ascending air bubble is detected by the relative permittivity signal.

As a second experiment water bubbles with conductivity of 1.4 µS/cm were dropped into the column (see video below). The descending water bubble is sensed by both permittivity and conductivity signals.