There is presently a considerable research interest in the formation of amorphous diamondlike carbon (DLC) films because of their smoothness, transparency, hardness, low friction and low electron affinity. This material has a mass density close to diamond and a high fraction of tetrahedrally coordinated carbon atoms (80-90%). Therefore it is sometimes called tetrahedral amorphous carbon (ta-C). Experimentally, such films have been successfully deposited by mass selected ion beams, filtered vacuum arc or laser ablation of graphite.
It is an attractive goal to understand growth, structure and properties of ta-C from an atomistic perspective. The increasing computational capabilities encourage to perform such theoretical investigations, but the requirements on a physically reasonable atomic-scale simulation of ion-induced growth processes at hyperthermal energies are still enormous, even if much progress has been achieved in recent years.

We performed molecular-dynamics (MD) studies of ta-C film growth. The evolution of the atoms in time and space was computed by the numerical solution of the classical equations of motion. Starting from a diamond {111} substrate, subsequent impacts of neutral energetic carbon atoms (E = 20-80 eV) were simulated (Fig. 1). In contrast to previous investigations, more than 103 impacts were taken into account, so that steady-state film properties could be achieved. Since such extensive computations are only feasible by means of classical potentials, which are computationally efficient, but less accurate, we have addressed the question, if available empirical potentials are able to model the chemical specificities of the structural rearrangements initiated by hyperthermal atoms. Our calculations were performed by using the widely accepted bond-order potentials of Tersoff and Brenner. 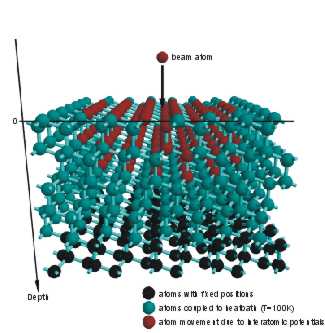 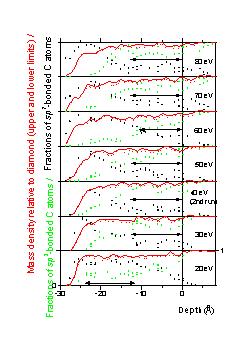 The mass densities relative to diamond (solid and dashed red lines) as well as the fractions of sp3 (green symbols) and sp2 (black symbols)bonded C atoms are shown for films deposited with different C+ ion energies. Two depth profiles are given for each quantity. They differ in inclusion or neglect of the fivefold coordinated atoms occuring in the computed atomic network. The horizontal arrows mark the inner film regions which were used to calculate the average film properties and their root mean square deviations plotted in Fig. 3. 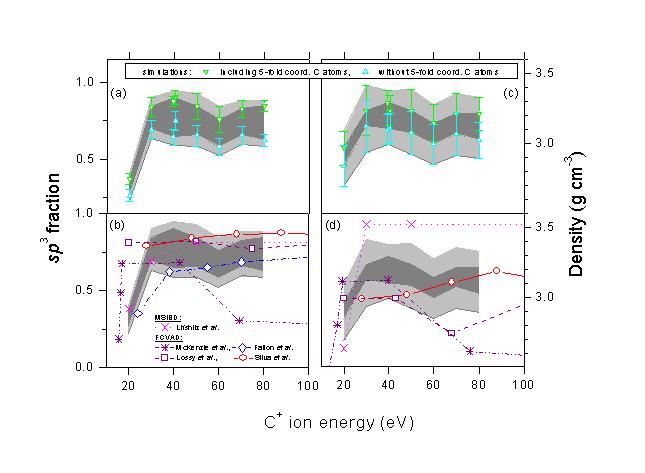 The top parts of the figure present the upper and lower limits, together with their standard deviations, as concluded from our simulated depth profiles (Fig. 2). The shadowed areas visualize these model predictions, they are compared to experimental results in the bottom parts of the figure. The data from the literature refer to mass selected ion beam deposition (MSIBD) and filtered cathodic vacuum arc deposition (FCVAD).